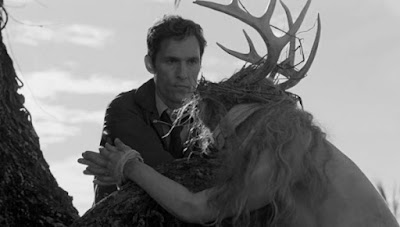 There are a couple of things I was fascinated with since I was a child. Antlers and horns were and still are one of these obsessions. They make me sigh in awe upon seeing them on majestic beasts that wear them like nature's given crowns, and it's safe to say that they usually grab my attention if present in any form of artistic work.

Summer is at our doorstep and to us Northerners it usually starts with one thing - summer solstice celebration, which will happen in less than a month from now. The day is the longest and the night only takes a couple of hours. It is a perfect time to get closer to the nature and to have some wild sex. We have been dormant for pretty much whole autumn, winter and spring, and now it is our chance to live a little. It seems that nature here tries to compensate for all of the lost time during the cold and dark period of the year which pretty much lasts the same amount of time as an average human pregnancy. I love summers here, higher up in the Northern hemisphere, and it seems that yesterday I've found a worthy soundtrack for the one to follow.

Supposedly a one man LIVE project from Poland where the multi-instrumentalist plays a six string with his one hand, drums with his feet and slaps the shit out of the snare drum and cymbals with his ginormous dong and balls as well as switches between samples with the power of mind bullets. Long story short this mastermind's music is that of a cumming-quality sludgy white boy blues reminiscent of Left Lane Cruiser... just way better, gloomier and it for sure deserved to be included into the soundtrack for True Detective's Season 1 (not to be confused with Lame Detective's Season 2). The "band" is called ROGI and as you might have gathered by now it means horns in Polish. I would love to experience this horny music god play live 'cause it looks quite impressing even captured on video.

The project has three releases so far. Buy them all! You'll receive some instant gratification, and the poor bastard will be able to afford one or two session musicians to take his music to another level.

Also if you haven't seen True Detective's first season you are ought to do so!
Author: Regnārs Breikšs Published at: 13:57:00