Daily fix of them good ol' blues pills: from Lightnin' Hopkins till EYEHATEGOD 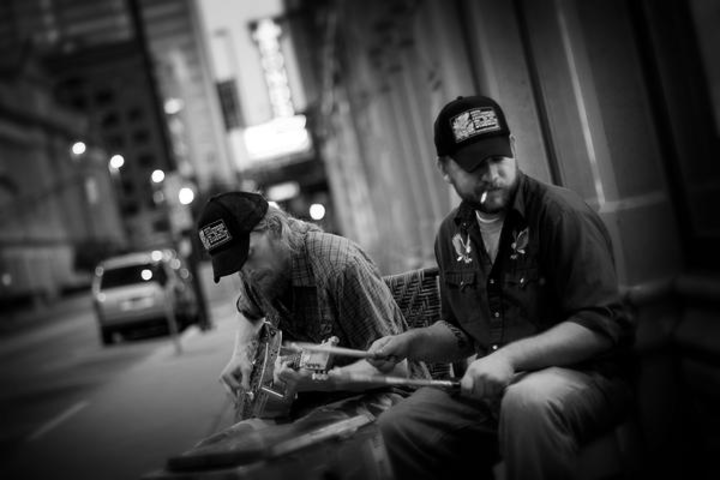 End of the year, New Year's eve still ahead of me, only 13 bucks left in my pocket till my payday (which is in a week from now) make me feel blue. Bartender, Jim on the rocks and the cheapest beer you've got!

If you are reading this, then in a very festive spirit of the upcoming holiday season, I would like to wish you to choke on your gift, you miserable, manipulative cunt! Just live your pathetic life and stop projecting your shit onto other people. (You know who you are)

Kind regards up your rectum,
Regnar

Email ThisBlogThis!Share to TwitterShare to FacebookShare to Pinterest
tags: rant

When "side projects" don't suck...

What did the mastermind Mr Scheidt do when Yob got disbanded in 2006 up until the reformation of the band in 2008?
- Well, he formed another band together with Indian's Will Lindsay.

We can't stop here, this is bat country!

What is the first band that comes to your mind when I say "South Africa"? If you just mumbled "DIE ANTWOORD" then you have two options my dear reader:

Ruff Majik is a mental, very addictive and sexy stoner/desert rock act from South Africa. I think I have nothing more to add to it except that rock is NOT dead. Actually quite contrary to popular belief, it is still alive thanks to the bands like this - let the music speak for itself friends, it's time for some good ol' sex, drugs, and rock'n'roll!

No yoga for fat men

A lot of my friends and acquaintances have been badgering me forever about my strength training routine and how can I manage keeping everything on track - a full-time job, a band, family and training. It is a lengthy and boring subject so I guess the short answer is, I don't. It is physically impossible to be full bore at everything all the time so setting the right priorities at the right time based on my short term goals is probably the key. To avoid getting frequently nagged by annoying bastards in the future I decided to put a detailed description of my training routine here and use it as a reference later on when someone else will ask me the same darn question again.


I like to keep things as simple and as specific as possible, I'm a firm believer that a perfection of a strength training program lies in repeating the same thing over and over again consistently over a great period of time and slowly increasing the load and/or volume you are working with - progressing linearly. The best thing, you as a lifter, can do is not get hurt as you keep adding more weight to the bar. That said the program I've been using with great success for the last few years now is a bastardized version of Wendler's 5/3/1. To learn more about the 5/3/1 pick up your copy of the book here and support the man behind it! To give you a fair expectation about the results, I increased my maximum deadlift by 65kg (from 150kg - 215kg), max squat by 62,5kg (from 130kg - 192,5kg) and my bench by 30kg (from 100kg - 130kg) over a not so long period of 3 years. I've been training different sports since I was around ten and strength training since nineteen, now I'm 27, so not all of my progress contributes to 5/3/1 but it surely makes up a significant part of it. All the lifts were done raw and, not considering my usage of alcohol, I'm pretty much drug free. Here is the template I'm using at the moment.


Essentially my goal is to strength train 3 times a week consistently and not waste any of my precious time on stupid shit like decline bench dumbbell flyes or wrist curls. Doing only the things that count leaves me more flexible and I have the ability to do other stuff besides training in my spare time. I can write music, write my blog and spend time with my girlfriend and son. Once I started building my training around my life instead of building my life around my training everything just fell into its place. I try to live a little, get my ass to a party, hang out with friends and family or spend an occasional training day creating something of an artistic value if the opportunity presents itself. I can always switch the training days or do the "meatgrinder" (training three days in a row) to make up for it. I don't take deloads every fourth week as Jim tells to do in his book, because I consider myself being too weak to actually overtrain.

Gruss vom Krampus / Half a dozen of 2016 must hear releases.

I guess the title is pretty much self-explanatory. As you have noticed then to create senseless album tops has become somewhat of a Christmas trend practised by various metal zines and fans around the word. Let me jump on the bandwagon as well. Yule is at our doorstep and I hope you've been staying naughty this year 'cause Krampus is coming to your house! He'll  probably bring you a sweet leather jacket and some ass-kicking metal albums.

Psychedelic, trance inducing black metal! The compositions of the songs won't leave you disappointed as they are both elegant and clever.

Crushing and evil... it made me harder than Chinese calculus. You can't even imagine how many consecutive plays by me has this album experienced.

Earlier this year Lord Mantis and Indian had announced that their long time drummer Bill had passed away at the age of 35. Rest in power Bill Bumgardner, you will be missed!

High output psychedelic stoner riffage from beginning to end. Saw these guys live at Devilstone this summer, they just stole the whole show and completely blew my mind - one of the best live performances I've witnessed by far, been hooked ever since.

Everything on this album is close to being perfect and songs just tie into one another letting the record flow uninterruptedly and flawlessly. Bloodiest is music the same way Chopin's Nocturne No. 20 is music.

Combining thrash and grind elements with the dirt and heaviness of sludge, this band manages to achieve an old-schoolish, visceral and even expansive sound. Killer tones, savage riffs and reverberated vocals that even Matt Pike would approve of intertwine with the most masterful usage of unusual rhythmic patterns since ever.