South is where the heart is.

My love for the southern steel started when I was in my middle-teens, I had a friend named Tagir, rest in power buddy, I really miss your jokes! ...the dude was really into some awesome stuff back then while I was mostly listening to some shit that I wouldn't even pass as music nowadays (of course there were a few exceptions to the rule, but it was mostly utter crap). I remember there was a birthday party we were celebrating at the studio where Tagir and his band-mates were having rehearsals. What was I doing there? Well, fooling around predominantly. I was a useless piece of shit back then just like the majority of teens. Tagir played his guitar and our fat common friend blasted the drums. We drank vodka, ate raw mushroom-mayo sandwitches, had a great time and at one point Tagir put on Pantera's I'm Broken on his very old and worn out guitar combo amp. It was at this exact moment when I fell in love with Mr. Phillip H. Anselmo's music. Later on in my life I discovered Down, Crowbar, Housecore Records, EYEHATEGOD and many more. I consider Phil being one of the most influential people in today's worldwide metal scene, both in the underground and in the mainstream. Today, to prove that NOLA's spirit keeps on thriving on every single continent,  I give you 3 southern groove metal albums from around the globe.

Anchoring yourself: 5 core values I hold in high regard / 2 records I spun far too often recently Before I start off by arrogantly listing my five core values and making myself better than you, I would like to make a short disclaimer that I'm not trying to life-coach anyone. I simply wanted to put these values down on paper to have the ability to look back at them once in a while, if my life would ever require me to do so. Everyone must have their anchor and here's mine:


Below you'll find two records I've spun far too often during the last couple of months. Both of them are very sludge, much wow. Enjoy! 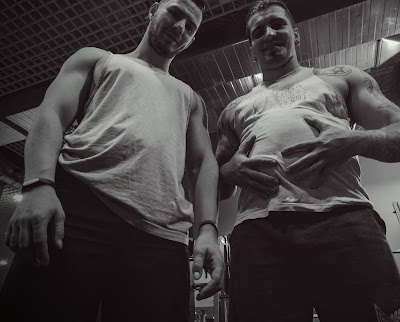 We're all fat and lazy motherfuckers.

No we're not, we're just in the high energy conservation mode.

We take too much time in between sets because of our shitty GPP*.

Whenever you see a powerlifter at the gym sitting and relaxing before the next set think about this, he is not just relaxing, he is waiting. Waiting for his eyesight to return to normal after his previous set. Once the sight is back he'll  be ready to squat again! This phenomenon usually lasts up to 3 minutes. Now, if the dude is squatting in full gear then add another 2 minutes for him to wrap his knees, and if you've ever put on knee wraps yourself then you know the struggle. It wears you out even more than the squats themselves, and besides walking up to the rack looking like a doof, the only thing you can think about while squatting is the glorious moment when you'll finally be able to take those medieval torture devices off your knee joints.

We don't do cardio.

Partially true, most of us tend to do sport specific conditioning - grocery carries, sofa deadlifts and toilet squats.


We don't give a shit about nutrition.

Completely false, we do put a great emphasis on essentially eating only whole foods. My absolute favourites are a whole chicken or a whole pizza.

We don't! In fact my staple everyday mobility routine contains things like the TV remote fetch-stretches (to release that irritating stiffness in your upper hamstrings and lower back) and the cock'n'ball pull-aparts (to help you get into that bottom position of the squat without any pain or discomfort).